Get your reclamation notice examined

Because of the coronavirus pandemic, several million solo self-employed people and companies received financial support from the federal government of Germany and its federal states. However, some of the money paid out is now being reclaimed by the state. Anyone who is asked to repay coronavirus emergency aid or other benefits either partially or in full, should initially seek legal advice. Indeed, it is often possible to act successfully against a repayment notice. Goldenstein commercial lawyers offer a free initial consultation in respect of this.

Would you like to check whether the reclamations of your coronavirus emergency aid is legal? Simply fill out our form. It only takes a few minutes.
2.

We review your case

As soon as we have received your information, we will review your case for you free of charge and without obligation. We will explain whether it makes sense in your case to challenge the respective repayment notice.
3.

You receive our support

If your repayment notice is contestable, we will be happy to support you with this plan, if desired. If necessary, we will even go to court for you.
Your Contact
Marc Baschin
+49 331 - 2005720
coronahilfen@goldenstein-kanzlei.de
Get advice now

Financial support during the coronavirus: How the state supported the economy

The state repeatedly provided support for businesspeople and companies in Germany, owing to the economic effects of the coronavirus pandemic. So-called coronavirus emergency aid was created as early as in the spring of 2020. In addition, this was subsequently followed by bridging aid I, II, III, III Plus and IV as well as the November and December aid. For solo self-employed people, temporary employees and short-term employees in creative occupations there was moreover also the option to apply for Restart Aid, Restart Aid Plus and Restart Aid 2022. 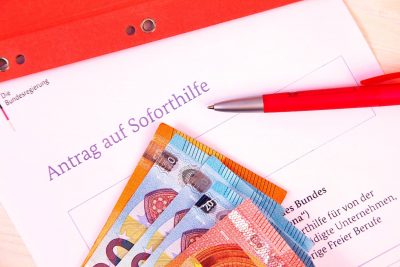 Owing to the pandemic, the state initially planned for support up to 50 billion euros. In total, however, the federal government and the federal states paid out significantly less. A little over 21 billion euros was therefore invested in coronavirus aid measures. Most of this sum was remitted to almost two million solo self-employed people and companies in 2020, as part of the coronavirus emergency aid.

In order to claim coronavirus emergency aid or other state benefits at the height of the pandemic, certain requirements had to be met, although these sometimes differed from one federal state to the next. Indeed, there were no applications for coronavirus emergency aid that were standard across the whole of Germany. Essentially, however, the rule that applied everywhere was that corresponding money should be paid out only if the beneficiary would have experienced payment difficulties without this aid.

Many coronavirus aid payments are being reclaimed

Nationwide, applications for coronavirus aid were processed relatively unbureaucratically by German standards. Even the wait for payment of the approved amounts was often not long. Yet, once again, many companies and solo self-employed people are potentially now incurring additional expense as a result of their aid applications. In the midst of the energy crisis, the state is either fully or partially reclaiming an estimated quarter of all coronavirus aid payments already approved and made.

In recent months the authorities responsible have re-examined applications that had already been approved. However, some companies and businesspeople have also been asked retrospectively to examine the legality of their aid payments on a website. If, in the opinion of the authorities, it emerges that the coronavirus paid should not have been paid at all – or at least not to the same amount – then the money is being reclaimed. Yet such reclamations are not always legal. Several German courts have already clarified this.

The reclamation of coronavirus aid is often illegal

Reclamation notices frequently list various reasons for the requested repayment. For example, they mention that an application was completed incorrectly, predicted liquidity shortages did not actually occur, or too much money was paid by mistake. Sometimes the payees are even accused of fraud.

In some cases, corresponding reclamations are based solely on misunderstandings, which can be resolved with brief correspondence. However, it is sometimes also necessary to challenge an illegal reclamation notice by legal means. A number of businesspeople and companies have already had success with corresponding complaints.

In North Rhine – Westphalia, for example, several courts have dealt with coronavirus aid reclamations and taken a clear view here. The administrative courts in Gelsenkirchen, Cologne and Düsseldorf have all taken the side of the businesspeople and companies bringing the claims.

Among other things, the judges in North Rhine – Westphalia complained that only after approving numerous corona virus emergency aid applications did the state government create the possibility of subsequently reclaiming amounts that had been paid. Moreover, the state government also changed some of the financing conditions only retrospectively.

Many coronavirus aid payees therefore had no way of knowing that the support would potentially have to be repaid at a later date. The courts responsible therefore decided that the corresponding repayment notices were illegal. In other federal states there are also already many arguments against the legality of numerous reclamation notices. Companies from all over Germany should therefore initially have corresponding notices legally examined, before making a repayment.

This is how it works:

1.
Complete our online form or contact us directly by telephone on +49 331 200 5720 or by e-mail to coronahilfen@goldenstein-kanzlei.de.
2.
We will explain to you in a personal conversation or in writing whether it makes sense in your case to challenge the respective repayment notice.
3.
You send missing documents to us, and we conduct a final examination of your case free of charge.
4.
If your repayment notice is contestable, we will be happy to support you with this plan, if desired. If necessary, we will even go to court for you.
Get advice now